It's a common misconception that people believe stretch film and shrink film are the same thing.  It's true that both shrink and stretch films are designed to unitize products onto pallets and both are generally made from polyethylene resins.  Shrink films are produced on blown film lines and stretch films can be produced on either blown or cast film lines.  Outside of those similarities, the two packaging systems don’t have a lot of other common characteristics.

Shrink films contain a high percentage of low density polyethylene (LDPE), which is the same type of resin used to make bread bags and newspaper overwrap sleeves.  When fabricated under very specific parameters, LDPE gives shrink film its "shrink".  The stress or tension required to make the film contract is frozen in during the fabrication process.  To activate shrink film, a heat source is required such as a heat tunnel, heat gun, or torch.  When sufficient heat is applied to the film, it approaches its melting point and the film begins to draw up or “shrink”.  Because the film can only shrink so far, each product to be wrapped has to be matched with a specific size and configuration of film.  As film resins go, LDPE does not have good puncture or tear resistance and has a relatively low load holding force.  In order to provide sufficient load containment and protection for the load, these films are generally several times thicker than most stretch films.

In contrast, most stretch films contain high levels of linear low density polyethylene (LLDPE) and, depending on the end-use application, can stretch from 25 to 300%.  Stretch films are either designed to be applied by hand or by machine.  Hand films usually have minimal stretch (25-100%) in order to aid the operator in applying the product and are in many ways similar to a large roll of very thin tape.  Machine films on the other hand can have very high stretch levels (150 -300%) and, because they are applied by automated equipment, can be configured to exert very high levels of tension on a load if desired.

Shrink films are good for applications where the object to be protected requires five-sided protection (top and four sides) or is very large (boats and industrial equipment).  For five-sided protection on finished products such as washer/dryers, refrigerators and other appliances, along with bagged resins and cement/concrete, stretch hooders have started replacing shrink films as the older shrink tunnels are decommissioned and new, more energy efficient equipment takes its place.

With regards to palletizing loads, stretch films are significantly more economical to use than shrink films due to the lower capital costs, the amount of energy required to apply the film, the ability to apply one product to different load configurations, the ease of adjusting the load holding force and the total weight of film consumed per load.  All things considered, stretch film is not only the most economical, it is the most energy efficient, reduced source, and recyclable product in the unitizing industry. 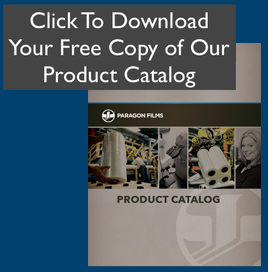 Shaun is one of few industry veterans who has come to understand the complex resin side of the business. A natural at product development and patent execution touting 22 years of experience, Shaun has an undeniable knack for taking lofty product ideas and making them a reality. With an impressive roster of patents to his name and several more awaiting approval, it’s clear to see Shaun’s passion for innovation and excellence is a major driving force behind Paragon’s revolutionary crop of products.

Whether it be seeking out the next product break through, stalking foul on a hunt with friends, or finding the perfect raft for floating with his wife in their pool, one thing’s for sure – Shaun is always on the hunt and will settle for nothing less than the biggest and best.

Suggestion For An Article?